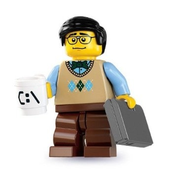 Architectural speaking Rotterdam has a long history with bold architecture.
Being one of the largest harbors in the world, the dynamics of the harbor means building spurs every few decades. Also existing buildings are being re-purposed or renewed during the years. These circumstances led to an exiting skyline that represents years of Architecture.

The LEGO Architecture Rotterdam set consists of 5 unique buildings that together give a perfect overview of the architectural diversity of Rotterdam.

The newest Architectural marvel of Rotterdam is named after the city, The Rotterdam is designed by architect Rem Koolhaas and was said to be his gift to the city of Rotterdam. The icon building has been right at home in Rotterdam and added a new flair to the skyline.
Designed as a city in a city the building houses offices, apartments and a hotel it is currently the largest building in the Netherlands.

Build for the 1960 Floriade, The Euromast is the highest building in Rotterdam and The Netherlands. The concrete tower has a observation platform with a restaurant and an hotel. On the Space Tower visitors can take a rotating elevator all the way to the top of the tower.

The Witte Huis or White House is a 1898 building, constructed in the Art Nouveau style. The building is 43 m (141 ft) tall and has 11 floors. Upon completion it was the first sky scraper in The Netherlands and the second in Europe. Before construction could start 1000 piles were driven into the ground to support the building's weight. Currently the building is a national monument and an historic landmark in Rotterdam.

The river Maas runs through Rotterdam to the North Sea. Undoubted the river was crucial to the succes of Rotterdam as one of the worlds largest harbors. Having a river running through a city also means you have to be able to cross them. Naturally Rotterdam has several bridges and a tunnel connecting both sides of the city. Although Rotterdam has some eye catching bridges, Since its opening in 1996 the Erasmus bridge became the defining image on the Rotterdam skyline.

Situated next to the large market-square in the center of Rotterdam the Markthal created an unique structure calling back to the time supermarkets did not exist and people bought their grosseries from individual sellers.  The market hall has apartments and offices in the building and an market hall underneath. This unique structure really propagates the Architectural status of Rotterdam.

Ultimate urban architecture can be found in the Cube houses. The houses where created to use of tight urban spaces to create the maximum amount of living space possible. By rotating a Box architect Piet Blom created cube shaped houses that fit together tight and have a maximum available living space. Even after the are build 38 years ago the houses are still a unique sight.