Hyrule Castle From Zelda: Breath of the Wild 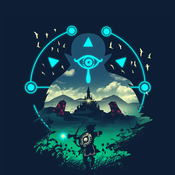 By HylianBuilder
22 comments
Hyrule Castle is one of the most iconic landmarks in The Legend of Zelda: Breath of the Wild, acting as the centerpiece of Hyrule, the final dungeon of the game, and the location of the battle between Link and Calamity Ganon. This set would come with a microscale model of Hyrule Castle, Link and Zelda minifigures, and a stand for the minifigures. This microscale model of the castle is built on a 32 x 32 area (the same as a baseplate, although the base of this model is built using bricks for more support). The stand for the minifigures is minimalistic, with a spot for each minifigure to stand and a Legend of Zelda plaque.
The castle build itself is based on Hyrule Castle before the Great Calamity, and features the Sanctum, Princess Zelda's Study, the main gate, the two guardhouses, the entrance to the hidden docks, and the exposed portion of the library, as well as many ramparts. Although it is impossible to fit all of the structures in at this scale, I attempted to fit as many in as close to their original locations as I could. This model lends itself to microscale, as it would be far to large to construct any more than just the sanctum at minifigure scale, and there are many parts of the structure that are easy to recognize when built with a minimal number of bricks.
Please leave your thoughts and suggestions in the comments!