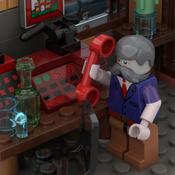 By AchMech03
26 comments
The Swift Striker : an original spaceship model made by me. This minifigure-scale starship has great interior space, including a single-seated pilot's station with controls and computers, a cargo/living room area, and a rear engine compartment. All of the necessary equipment is included in the model: the engines, connected to the ship's turbines, the hologram projector to communicate with other starships, and the passenger seats. There is also a rotating laser turret on top of the ship, with space for a gunner minifigure.
I believe that this model is great for any LEGO fan, given both its playability and the relative complexity of the build, which allows for a great building experience, as well as a chance for epic adventures in space! Children can use their imagination to embark on space missions with the three included minifigures, and LEGO collectors can proudly display the Swift Striker on their shelf. Overall, this building project will satisfy even the most hardcore sci-fi lover!
Play features:
Minifigures: