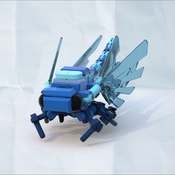 I’m taking a “less is more” approach from my last project (HERE).

I envisioned a world of tiny brave men, where everything is giant to them in comparison. Think 1:1 ratio or a bit smaller.

They live in the woods floor and tame bugs as their rides, living the craziest adventures as they avoid being seen, eaten or caught; however, their biggest threat are birds or other bug-eaters attacking their rides while at flight.

The one from this project is Mike Alden. He’s a skilled bug rider, always has been, and tamed a great Stag beetle upon which he crossed path while exploring afoot. Boy, was that a fight, until the beetle gave up and accepted his new master unwillingly.

Mike’s new ride was able to hit top speeds of 6 Km/h (almost 4 miles per hour). While this wasn’t particularly fast in terms of flying bugs, its mandibles were useful to lift heavy stuff, and it gave Mike what he considered to be a mighty self-image.

Recently, in an unfortunate turn of events, a chameleon creeped upon them and attacked just as they were lifting off, sending Mike to the ground. Mike’s combat training hit off and a fierce battle took place against the color-changing wizard dragon. In the end, the chameleon decided to prey on an easier lunch while Mike tended to his beetle until full recovery. They were inseparable since then.

I’m going to make a series of these, as these fully articulated bugs are super fun to work on. I was aiming for an original idea for a set with great playability, but idk, I grew up playing with all kinds of bugs as a kid. I was no city child.

I intend to work on a female rider and her treacherous praying mantis next.