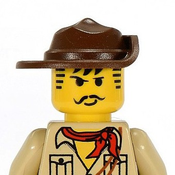 By Johnny_Thunder97
212 comments
Introducing my first ever IDEAS submission: The Old Barn!
Operating as a stable, workshop, and place of storage, this multifunctional building and its surrounding plot of land contain many hidden details and play functions:
This set was built using 2400 pieces, and contains 4 minifigures spanning 3 generations.
On the wildlife front, I have also suggested 2 horses, a rabbit, a bird* (in its nest), a spider, and a number of chickens... see how many you can spot!
The model's base measures roughly 32 cm x 39 cm (though the tree and sign both slightly overhang this), with the tree and barn both measuring 22 cm tall.
I think this model has an appealing colour scheme and layout to make it a neat display piece, but I have tried to still include a number of play functions, such as the operation of the crane using the weather-vane which I was particularly proud of.
Though originally intended to be a medieval build, I think the beauty of this MOC is that it doesn't feel out of place on the outskirts of a contemporary LEGO City, and therefore I really hope that this build appeals to fans of Castle and Farm themes, and also just anyone who loves LEGO as much as I do!
This model is far from perfect, and I may well continue to edit it over the coming months to improve some of the smaller details, but more importantly I'd love to see one of the LEGO designers put their stamp on my idea. I would be incredibly grateful if you would help me make that a reality by supporting this project, and together we can see this idea become a genuine LEGO set!
*The bird on the images here is a crow (piece 13665)- though I would have much preferred to include piece 41835pb01, but unfortunately it isn't available on digital design programmes.