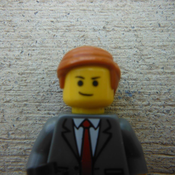 These two space pods were designed to support each other. The Strike Pod (The lower ship) is a strong, armored pod with heavy weaponry, which makes it a great defensive and offensive ship. The Carrier Pod (Above) was built for speed in transporting the Strike Pod, which adds mobility and speed to the Strike Pod.

Both of these models were built around the cocoon pieces from the Galaxy Squad theme to give it an unusual shape. The front sections of both pods are easily detachable to allow a minifigure pilot to fit inside.

The Carrier Pod has a sleeker design that the Strike Pod, with less armor and weapons. It carries one light ion gun, for basic defense. It mainly relies on its very high speed to escape enemies with stronger weapons systems and armor. The two extra propulsion wings add extra speed and stability. With tons of speed and maneuverability, the Carrier Pod can get in and out of trouble in a flash!

While sacrificing high speed and long distance travel, the Strike Pod has a tougher design and heavier weapons systems than its counterpart, the Carrier Pod. Featuring landing gear, an armored cockpit, one medium front laser, two heavy side lasers, a powerful engine to propel the heavy ship through space, and fold out wings to help it glide high above alien skies, the Strike Pod has all of the firepower and toughness to get the mission done!

Please feel free to leave a comment and add your feedback!