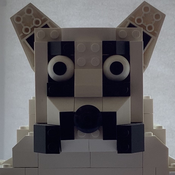 By VARJR17
30 comments
The Rocketeer is a classic superhero character created by Dave Stevens first appearing in 1982, and inspired by classic serial superheroes from the 1930s and 1940s. The character and his mythos appeared in a feature film in 1991 introducing many to the character. This set is based off of the movie, in particular The Bulldog Café, which is featured heavily in the movie and comic series. The Bulldog Café is used by the pilots of the local airfield, including The Rocketeer himself.
I built The Bulldog Café over a couple of weeks constantly redesigning and building. I hope that I have done a good job and successfully recreated this amazing, creative structure.
I have also included a mobster car which has room for a passenger in the back.
I have also included a podium with a flag to recreate the iconic scene and to present the Rocketeer minifigure.
This project contains:
The Rocketeer equipped with rocket pack (and hair, for when the helmet is removed)
Butch the Bulldog
Jenny
Neville Sinclair
Mobster
Thank you for checking out my project, If you like it please support!