Guardians of the Plants 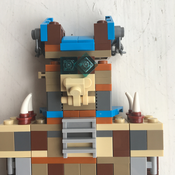 At a time when people were destroying a lot of plants and were cutting down trees, they found a big tree in the Amazon tropical rain forest that would enable them to build 20 houses! When they brought in a machine to cut down the tree, it picked up the machine and threw it away on a garbage heap.
A week later, in Norway, a man was trying to cut down a pine tree that suddenly picked him up and ate him.
Around 12 hours later, in Mexico, a farmer was pulling out weeds from his garden while one of the weeds grew as tall as the farmer. When the farmer tried to also pull out that weed it threw very sticky slime at the farmer keeping him stuck for over a month.
A little herb lady in France was picking herbs to sell on the market when two herbs shoot into her direction trowing her back into her house. One herb grew as tall as a man.
Ten weeks later. In Holland, people were cutting flowers to put in vases when one of them pulled out a flower without roots the flower was big as a man and kicked him.
These living creatures were called the Guardians of the Plants.
This would be a great Lego Set because it has a good story to tell.
The set has 346 pieces in total.