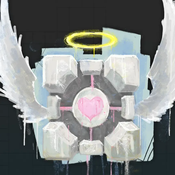 By Bucket_Science
13 comments
Portal 2 Spoilers! This is the ending shack of Portal 2, after defeating the game, and pushing Wheatley and Space Core into space, GLaDOS rewards the player by letting the player go out into the real world, the outside world looks like a wheat field, and the shack that you used to get out was the inspiration for this build. I built this idea to maybe let the spirit of Aperture Science to life and to let Portal have an actual set, instead of just a Lego Dimensions part, this is because I feel that both of Portal 1 and 2 were amazing games and don't get much representation in many things, such as Lego so I wanted to bring this bad puppy to life! I feel like this would be an amazing Lego set, because it would be eye-catching for Valve players, which are a large number of people, and even if these people haven't seen or played Portal before, this could inspire them to play the best game in the universe!