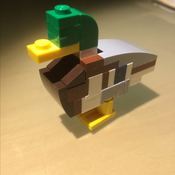 A zoetrope is a pre-film animation toy. The word means “wheel of life”. Think of it as a Victorian-era animated-GIF.

It consists of a series of images inside a cylinder, that, when viewed through the slits in the side of the cylinder, create the illusion of motion. As such it embodies the principle used in all film and animation. The slits prevent the image from simply blurring and act like the shutter on old projectors. This style of zoetrope (in fact called a daedaleum at the time) was invented in 1834 by mathematician William George Horner, though an Iranian bowl, similar to a zoetrope showing a jumping goat, dates back 5000 years!

Features of the LEGO model:

There are at least three reasons why this would be a great LEGO model:

To see it in action watch the short video!

But to really appreciate the magic you need to build it and hold it in your hand, which means it needs your support!

I hope to be posting updates to explain or improve on aspects of the model, to show new animations I develop and of course in response to questions and suggestions in your comments.

Many thanks for taking a look!