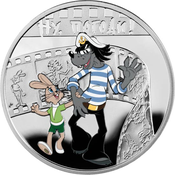 By markas83
15 comments
In 2014 we're gonna to be a part of the biggest holiday in the world - FIFA World Cup 2014 in Brazil. Most probably the final game will take place in new Maracana stadium. This will be the greatest event for all football/soccer fans in the world - The Game returns to the Holly Fotball's Place.

For that reason, to satisfy a lot of football fans, I propose to create special LEGO edition for FIFA World Cup 2014 and design Maracana Stadium with two teams (11 players per each team, or it may be less because of the size of this LEGO construction). The variation of the teams may be as follow:
- any team can be choosen by the customer
- Brazil is one of the team and the second one is a team from the country where the LEGO package will be sold
- two final teams (but this one must be done after the World Cup final)