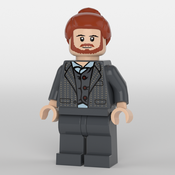 In the middle of the forest lives Angus, Majisto's former apprentice and talented alchemist. He decided to build his house in the middle of the nature, on a swamp, so he could have a constant access to a wide variety of ingredients to perfect his craft, and in addition to the wild fauna, flora and funga that surrounds his home, he has a small garden where he grows plants and flowers.
But there's another reason why Angus decided to live as an hermit so far away fro meverything : he was given a secret mission by his former teacher : hide the Orb of Majisto, a powerful magical artifact that could cause a lot of harm if it were to fall in the wrong hands, and keep it in safety.
I love the idea of houses built over bodies of water, and wanted to bring something different to the medieval genre by making a model that's much more focused on nature than the usual castle creations, with many of plants, mushrooms and animals surrounding the house, and the use of a lot of wood for the footbridge and the house.
The door of the house can be opened, and the roof can be removed to see the fully furnished interior, with a bed, a chest, a shelf, a table, a chair, and an alchemy table with a variety of alchemy ingredients.