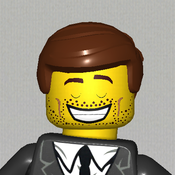 I have, for your consideration, my take on the Skyline of Portland Oregon.

Having grown up around Portland and having actually worked in the iconic KOIN Center,  I thought it'd be fun to give a shot at trying to capture as much of Portland's uniqueness as I could in Lego form.  This is about the fifth rendition of the skyline I've created, the first being double the size with almost 2000 pieces.  I've worked hard to scale it down a bit, including taking out some buildings and redesigning what I could to bring the piece count to a reasonable level.

The overall dimensions are 48 studs wide, 12.8 studs at its deepest and 14 bricks tall.  With a current total of 699 pieces.

It was tricky, but the goal was to design this with real lego colors and parts in mind.  There are a lot of different colors involved, especially between the various glass and water elements.  Which I believe adds a lot of visual indulgence and is as true to real life as I could get.

Along with the rendering's, I'm including a photo of the model built.  The only details missing from the version sitting on the shelf behind me are vinyl decals for the Portland name plate and the Portland Oregon sign, which I digitally added to the renderings.