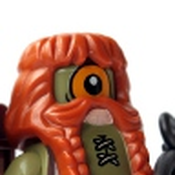 The Mole - originally Krtek - is a cartoon character created by Czech animator Zdeněk Miler. He has appeared in 50 animations between 1956-2002. The mole is curious, friendly and caring. The animations vary from couple of minutes to half an hour in lenght and apart from the debut, "How the mole got his trousers", do not feature any narration or dialogue. Character's non-figurative exclamations were voiced my Miler's daughters. This was to have the cartoons understandable in every language without need of dubbing. The mole cartoons have been very popular in several countries, including many Central European countries, Russia, India, Japan and Finland.

I loved the Mole cartoons as a child, and the golden memories haven't faded. The animations were cheerful and delightful. They usually had a point and something to say without never being haranguing. Their natural colours and stylised forest landscapes felt fresh and pleasant. The Mole is still dear to millions, and many adults remember it from their own childhood. The Mole toys and accessories sell trendomously well. It's also noteworthy that children's play area cars in Finnish trains have large images of the Mole in them. To me, the Mole feels like a personification of all things candidly nice and friendly; he's something that world of irony and depression badly needs. I think we all should cherish the Mole in ourselves.

I'm Eero Okkonen, a LEGO builder since childhood, LUG active for ten years and a builder known in the community from my character models. This is my first LEGO Ideas project. My model of the Mole is 23 centimeters (9 inches) tall, or 16 without his hair. It is a robust and solid build, featuring all-around round design with distinct smile, red nose and large hands. It does not fall of easily, but is quite light as it's mostly hollow. It is a perfect display piece and ideal gift for anyone who loves the Mole, while still being finely suitable for play. As a rounded, lively character model, it is an interesting example of what LEGO bricks - usually seen as blocky and angular - are capable of.

Please support the little Mole if you'd like to see him as a LEGO Ideas set. Your support is highly appreciated.