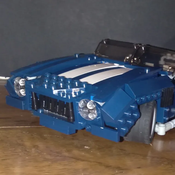 By BRICKBROTHERZ.
67 comments
Based on one of the most iconic scenes of all time, Lucy Steps Into Narnia: 75th Anniversary Edition is a classic and original build. This idea came from my many memories of reading the iconic C.S Lewis series, The Chronicles of Narnia. Originally published in 1950, the first book, The Lion, the Witch and the Wardrobe, immediately became a cherished literature classic for adults and children alike.
As the world of Narnia turns 75 years old, what better way to celebrate than to build a LEGO set based on one of its most well-known and well-loved moments: when Lucy first steps through the wardrobe?
Built with roughly 850 pieces, this diorama-style build beautifully captures the moment when Lucy and Mr. Tumnus the faun first meet.
Some special details of the build include:
Two minifigures, Lucy Pevensie and Mr. Tumnus.
Fully-functioning wardrobe complete with coats, a swinging door, and a light-brick.
Three snow covered evergreen trees embossed in icicles.
An ornate lamppost with glowing flame.
The designs and details of this idea came from classic Narnia illustrations by Pauline Baynes, as well as pictures from Disney's 2005 screen adaption of "The Lion, the Witch and the Wardrobe" (which soon turns 20 years old).
I hope you have as much fun checking out this build as I did creating it!