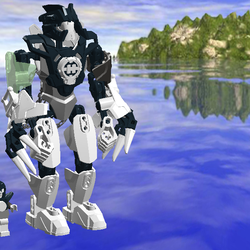 Sorry I haven't been on for a long time, I've just forgotten about LEGO Ideas.

Maersk is a real freight company, also used in LEGO. But Maersk has its own logo on the sides of trains. So, that's what I've done here. I've given CADA a train with its own logo on the side of it. This train is also custom, or at least I haven't seen a locomotive type like this. It is the same on both sides, it has a driver seat/cockpit on both sides, meaning that whichever direction it moves, it will be moving forward. For this design, BONUS, I even gave The locomotive a brick-built engine! though, NON-BONUS, thanks to the size of the chassis, I couldn't put motorized wheels on it. other than that, it's the best thing ever.