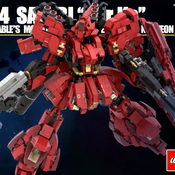 By Lazy_JJO
36 comments
Hello
I'm Lazy_JJO who makes LEGO robots.
This time, I made Lego RX-93 ν Gundam.
I've seen many ν Gundam made of Lego, but there's no ν Gundam that can be opened and closed. So I designed this ν Gundam myself. I designed it to match the original as much as possible.
This ν Gundam can be opened and closed in all parts of the upper body, shoulders, arms, knees, and feet. Also, if you use a glow-in-the-dark brick, the part that can actually be opened and closed will glow at night. In addition, the funnel can be separated and operated like the original.
More than 2,200 bricks were used to make the ν Gundam.
I hope fans of Gundam and LEGO from all over the world will enjoy this work together.
Please support me so that this ν Gundam can be officially released.
Thank you to all the supporters and viewers.