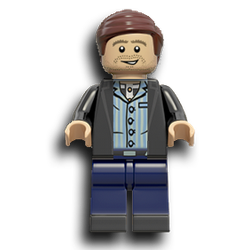 In December 1968 United Artists released “Chitty Chitty Bang Bang,” a family/fantasy movie based loosely on the book by Ian Fleming, that went on to become the #10 most popular movie of 1969.

The “star” of the movie, a fictional car named “Chitty Chitty Bang Bang” was based on the real-life series of cars of the same name constructed for racing by Count Louis Zbrowski in the 1920’s.

This UCS Chitty Chitty Bang Bang Lego model is based on the fully functional car as seen in the movie.  Note that the information on the UCS placard is with regard to the real-world prop built by Ford for the movie, but could just as easily be changed to information or trivia about the fictional car in the movie.

The set requires a few stickers, such as the license plate and the UCS information placard, and there are stickers on the hood to simulate the hinges on the original, but these could be omitted with little impact.

The model is much larger than minifig scale, so there are no figures in the prototype.  However, minifigs could be used to anchor the UCS placard, much like the Lego Group did with the UCS Tumbler, set #76023.

The 3D full-color image (the image with the glasses logo on it) requires red/green anaglyphic glasses to view accurately.  Many 3D DVDs come with compatible glasses (I used the glasses from the “Coraline” DVD to view the image while I was making it) but any red/green glasses will do.  Red/blue and red/cyan will also work but the colors will be distorted.