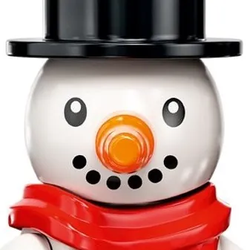 In 1999, a certain video game was released. Developed by High Voltage Software & Published by LEGO Media, we were given a unique racing game where we could literally build our car from the Chassis up.

This, my friends, was 'LEGO Racers'.

Many of the characters existed in actual LEGO Products. We had Johnny Thunder & the Baron from 'Adventurers', Basil the Batlord from 'Fright Knights' & so on.

However, there were 2 characters that were never released in Physical form: Veronica Voltage from the Time Trial Tracks & the Final Boss: Rocket Racer.