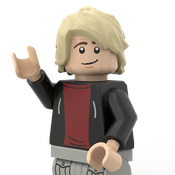 The PlayStation 2 is a sixth-generation home video game console released by Sony in the year 2000. Upon its release, it became a massive success throughout the entire World. The PlayStation 2 remains as the best-selling video game console of all time to this day.
The reason why I decided to build a PS2, was that I have a lot of fond memories playing the PS2 as a kid and as an adult, as this is my favorite video game console of all time. The PS2 celebrated its 20th anniversary in 2020, which is another reason why I decided to build this model.
This model includes 1941 pieces and is almost perfectly 1:1 scale with an actual PlayStation 2 (Original Model).
The controller can be plugged in to the console. It can be plugged out as well. The top of the console can be removed, revealing the inner components. All of these components, excluding the Expansion Bay, can be removed.
The PlayStation 2 left a huge impact on the world upon its release. Many people around the world still use the PlayStation 2 to play games from time to time. This model would be an excellent way to celebrate the fond memories the PS2 left in the hearts of many. This could also be an excellent model to study the inner workings of the PS2, or as a perfect gift for those who like video games.