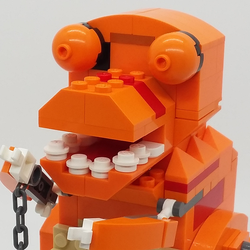 This idea is for a playable basketball machine. It runs on Lego Mindstorms and contains somewhere around 3,000 pieces. The colors are also based off the NBA logo. Please click on the link for a detailed video of the features!
You can chose from 6 players to use and they can be placed anywhere on the black plates. The further back, the harder the shot. When you're ready, you can either pay 75 cents for a paid game, or use the card for a free game. The paid game is on the left and it works by dropping money in from the top and pushing the yellow/brown lever in. The free game is on the right and it works by inserting a card and a mechanism pushes your card back out once registered.  Either way the game begins by dispensing 3 balls per player through a simplified conveyor belt mechanism.
Once all of the balls are dispensed, a countdown timer starts and the game begins. When the machine says GO! you have 5 seconds to make a basket before the buzzer. If you do make a shot you are awarded two points and one ticket. Both during and after the game the machine will display your score.  There is also a spot where you can insert a key to collect all the spent money.  At the back there is a door where you can access the interior mechanism. The game can be played in single player or multiplayer mode. In multiplayer you work together with a friend for a high score.
I built this because I love the Lego Sports theme! I think they were brilliantly designed and deserve a comeback. I have spent years trying to perfect this idea, and I finally feel it has gotten to a point where it could be an official set! I think it is well designed for play and offers something very different compared to other sets on the market. It is great for both play and display and you could very easily create alternate courts. I think for all those reasons it would make a fantastic set!
63
315
days left