It All Starts With An Idea 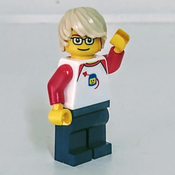 By DL Studios
9 comments
This build, which I call: It all starts with an Idea, is a powerful model. Depending on the person, this could mean different things. My original idea was to show the world, but with the perspective of a LEGO builder. The minifigure is imagining his or hers next creation. Some people may see this as the start of LEGO. Someone had an idea, and started an amazing company that we still use today.
My model shows a minifigure in the world. The minifigure is imagining it's next LEGO build. The world around it is very dark. His thought bubble is very bold, and the LEGO bricks inside even bolder.
I built this originally just for fun. After showing my family, and friends early versions of it, they all thought the story was different. They showed me different perspectives on my own build!
I think this would be a great LEGO set because it is what LEGO is today. LEGO starts with creativity, and inspiration in others, including me.