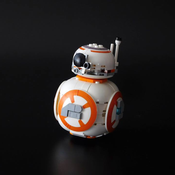 By fnxrak
37 comments
This is a small build of a iconic scene of a space saga (no, not that one). You may say that "there goes the internet" but I believe that Spaceballs deserves a set, and what better scene than the amazing space chase of the Eagle 5 escaping at the speed of light the Spaceballs One, that in a desperate move of Dark Helmet goes into Ludicrous speed and ends going into Plaid.
This Idea came from another LEGO MOC I created featuring a certain ship of another space saga, that we all thought at the beginning of this text, travelling at the speed of light, but even though Colonel Sandurz might be Chicken and risking to get my brains going into my feet, I had to try the Ludicrous Speed and that's how Spaceballs the LEGO IDEA was born.
Hope everyone enjoys the build as I certainly enjoyed designing it, I tried putting as much detail as possible in such small scale and although it has 535 pieces most of them go into the speed effects, so let's make it work so that one day someone can say "No Sir, I didn't see you playing with your dolls again"
P.S. The real deal will be updated ASAP