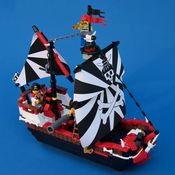 By SeaSlug3000
76 comments
May I introduce you to: The Skull Temple Fortress – a pirate keep, built on the remains of a ruined temple.
It can only be entered by boat through a mighty skull gate. It is reasonably equipped with guns, offers a prison cell and a treasure chamber and – of course – a shark tank! Larger goods can be hauled in by crane. There is also a lounge-quality throne deck. It can only be found by following the light of the flickering eyes of the tallest temple figure, which acts as a lighthouse.
I came up with the idea when I brought down my LEGO-chest from the attic. This was at that time when life suddenly slowed down a lot and offered much more time for challenging indoor activities. As a kid, I was a big fan of the Lego Volcano Island (6248-1), so I tried something similar and managed to build a working skull gate mechanism that included not only the skull but also some crossed bones. Well, the gate alone doesn't make much sense, so I built the rest around it. The idea was to build the one pirate castle I as a kid would have dreamed of!
The focus is on moving parts, traps and such, as well as easy accessibility. I have tried to include as many functions as possible:
Finally it has to be mentioned, that it is built with what there was to find in my LEGO chest, so it somehow is limited regarding certain parts or colours.
Well, I hope you guys like it. It was fun to build anyway.
Special thanks to Matthias for taking the photos and sharing the fun!