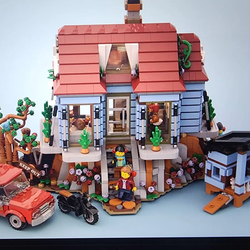 Presenting my latest Idea, The Sea Globe captures life under the sea as well as scuba adventure and treasure seeking of plenty!

As you build this set you'll begin to appreciate the life under the sea! There's so many elements in this set solely on the ocean, it's hard not to keep turning the crank to reveal more and more details for the exciting adventure anticipated while building it. I believe Lego designers would have a field day coming up with thier own version of my idea and would have a renewed appreciaton for the oceans creatures and it's admirers. Im 31, and this set is my favorite of all my previous ideas next to Sport Fisher.

This set took me a few weeks to come up with. The design of the base came first with a few color changes, I decided to go with the sand green outter colors and tried to maintain a dock and rock feel with a hint of gold treasure. The turning tables and gear mechanisim came second as I knew I wanted an interactive crank to turn the scene so the user didnt have to turn the whole set around manually The third phase was coming up with the scene itself and properly placing the elements and animals for the final display.

With a few tweaks and staying true to how Lego pieces fit together I managed to get the shark to be the focal point while still making it fit inside the globe without the tail rubbing the inside of the globe. Also the green coral/grass at the top fits just inside as well to give it a full to the top look and feel. I went for all the detail I could get out of what I had available for pieces.

Check out my video on YouTube to see more and get an even more "in depth" look! Quick note, I drew up this idea on paper before committing to it, I'm super happy I decided to go for it. If anyone wants to see it I'll post it in the update section!

The set would include

A diver with camera

Any comments and suggestions are appreciated, I'm also wonderig if I should build a secondary ocean themed base to further explore different types of ocean life such as rays, jellyfish, sea snakes, eels, the possibilites are endless with LEGO!

As Always, Build on! Thanks for checking out The Sea Globe!