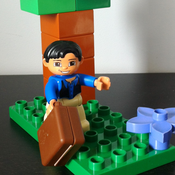 I'm so happy to present this project that I made for my daughter: Rapunzel's Tower from the movie Tangled.

I understand it is a children's project, and it probably won't get many votes. I know there already is a product of the same character, but I wanted to design this project for my two year old daughter  with Duplo bricks so she can play with one of her favorite characters. Here's the result.

The greatest difficulty in tackling this project has been the small number of minifigs in the Duplo range. So I have had to review old and discontinued parts to create the characters or their attributes.

The tower is simple to build, but with a solid structure, and it holds up very well during play. The climbing plant and moss add a touch of color and realism to the design, and Flynn can climb the tower for them! I know the colors I've chosen for this project are not the most common in Duplo designs for girls, but I think that yellow, purple and lavender is perfectly associated with the character of Rapunzel.

Thanks for your votes and support.