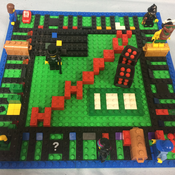 Love to play monopoly? Then try out this LEGO monopoly board game! Monopoly was published in 47 languages, sold in 114 countries, and played by more than 1 billion people world wide.

This set is complete with 7 minifigures, money, property base plates, die, houses and hotels, and an exclusive Mr. Monopoly minifigure, this playable board game is tons of fun.

I made it because I thought it would be cool to have been the idea behind a potential new LEGO set and because people will have tons of fun playing it over and over again!

Support this set if you want to see it in your store!