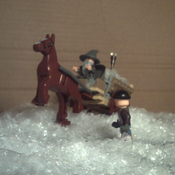 Hello, I am here today to showcase my LEGO Ideas Idea of "Lego Scout Camp".  I have just moved up from scouts to the explorers section.  I didn't have much to do in the half term holiday from school so decided to come up with an idea for LEGO. I would have constructed the product out of physical LEGO bricks but other than the lego sets I keep on display, I am limited in the bricks that I can use.  I am, however, planning to build this set out of physical bricks anyway, possibly in the future.  At scouts, we do lots more other than camping.  This can include; Hiking, Canoeing, wide games and badge work.  However, Scout camps are the thing that scouts look most forward to, so that is why this set is based on a scout camp.  I have nothing left to say that describes my set, so I am going to leave you with some information on the scouts association.

When was scouting Founded?

The Scout Movement was founded by Baden-Powell (BP) in 1907. BP took 20 boys from a variety of backgrounds to Brownsea Island in Poole Harbour for the first ever Scout Camp.