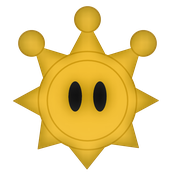 Interplanetary Robotics (IR) is a minifigure company. This is their newest technological advancement, the 8-wheeled VSTR (or Visual Sampler Terrain Rover).

The VSTR features an extendable neck that can rotate 360 degrees so it may have a panoramic view to collect the most visual samples. As well as that, it has an array of other cameras to see the things the main head cannot.  The rover's wheels feature a suspension system unlike any other LEGO rover. The wheels pivot at 6 different points, for crawling over most terrain forms.

The "section of terrain" mentioned above, is just for that suspension purpose. You can test the rover's wheels on this terrain by driving it over the bricks. On the left side of the terrain, you find a video camera so the scientists can gather information on the rover's suspension system.

If the rover breaks down in the tests, the set includes a maintenance vehicle piloted by 2 workers, just for that purpose. If the break is too high for the workers, no problem! The robotic crane on the back end of the vehicle can take care of it!

The scientists work at the lab. The lab has 2 seats and dashboards for 2 scientists whom may want to study the rover. A communications tower is on the side of the lab so the scientists can collect data that the VSTR sends them. Will the rover pass inspections so it may travel across the solar system? You decide!