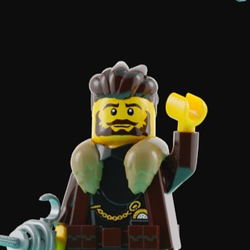 I'm a very big fan of zero year, and when I found out about the inclusion of the batmobile in the storyline I knew I would have to re-create it in lego. The Zero Year edition of the batmobile includes a snug cockpit for minifigures, and special pearl gold pieces. Along with a large number of purple bricks!

The set would also include a special batman minifigure, based on his depiction in zero year (purple gloves included).

Batman, the batmobile and the zero year comic series  is owned by DC comics