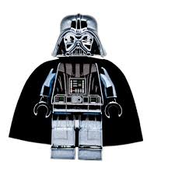 Hello, I am a 13 year old boy, but I've built this when I was 10. I am from Serbia. On vacations you sometimes get bored, so I decided to play with Lego.

I got the idea of buliding a spacecraft speed chase when I heard a lot of people talking about how they miss the "Classic Space" theme. So I decided to make somethig simillar, but different. Then I wondered, "What do people like these days?" Boom that was it - chases! People like high speed chases. All it took to build a nice model was hard work and time.

The story behind the model:

One day on a planet far away from ours there was a magic gem. It was so powerfull that the foreign planet goverment had to take it into a higly secured facility that was on the other side of the planet. The task of transporting the gem was given to one of the fastest drivers in the galaxy. He took of and drove into nothingnes. The mission was going right as planned but an enemy in a black ship was approaching. The driver went as fast as he could but the enemy was gaining on him. It was a long and intense chase but the driver deliverd the gem to the higly secured facility in time and the enemy had to flee.

I hope you like the model and the story as I hope you support my creation.