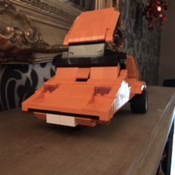 By Vopbug
20 comments
This is a 1:14 scale model of a British 1970 Bond Bug 700 ES. It was designed by Tom Karen of Ogle design and produced by the now defunct Reliant Motor Co. It was a 3-wheel sporty car aimed at the younger psychedelic generation and lasted 4 years when production ceased in 1974. They built just over 2200 examples, so they were quite rare even in the day and are now very rarer and very sought after. They are a very striking car that turn heads wherever they are seen especially in the bright tangerine livery and black decals. I’m lucky to own a real version, and I’ve always been an enthusiast, that’s why I had to build this Bug. Corgi, Bandai and Airfix all produced scale models and more recently DNA produced a limited edition 1:18 scale model which have all become sought after collectors items, and I’m certain this will apply to the LEGO Bug! We just need this version in production, so get voting 😜👍
My Bug measures approx 200 mm long and has the iconic lift up roof like the real car and an authentic interior true to the original!