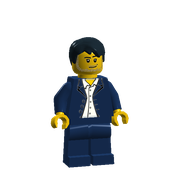 The “Hübbelbummler“ is a bus that operates in Siegen, a  100.000 habitant city in the western part of Germany. This LEGO model is based on the latest “Hübbelbummler” that was built in 2009. Twice a week it runs from the city center to the old town that lies on a hill. “Hübbel” means some kind of “small mountain” while “bummeln” can be translated with “strolling”. People get on the bus to relax or spend a good time while they receive information about Siegen through speakers in the interior. You can also rent it for company parties or for getting to football matches, The “Hübbelbummler” is a unique symbol of Siegen resembling a typical bus from the 1930s.

The model has round about 1.8k bricks, created with the LEGO Digital Designer and rendered with mecabricks. Added are six homemade stickers with the authentic “Hübbelbummler”-lettering and number plates.