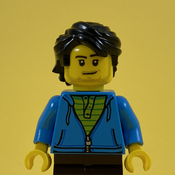 This is a LEGO world within a book. I had the idea to fill a spot on my bookshelf. I built it because I wanted to work on my creative skills with a medium that isn't mainstream. I also spent a good amount of time on the build with my daughter who is a young budding LEGO enthusiast. This will make a great set because the base idea for the BookNook can be expanded to include genres of literature or even book series (I can think of a young wizarding world that would be easily incorporated into the BookNook world). Fairy tales could come to life and interact with one another.
Features:
- Built to sit on a bookshelf among other books
- Top is constructed to look like pages of the book and lifts off
- The spine of the book is on a hinge and when opened, reveals the hidden world of the library inside
- The front cover is also on a hinge system that allows it to be opened a full one-hundred and eighty degrees to expose the interior of the library. The inner side of the front cover has original artwork and can be used as a backdrop.
- Once the library is open completely, it can be used for play
- The library has many features
- Reading table with lamps
- Full-sized couch in front of the fireplace
- Floor mosaic
- Suit of armor
- Coat of arms above the fireplace
- Bookshelves on two levels
- Fireplace
- Spiral staircase
- Lit sconces
- Hardwood floors with interspersed studs to allow minifigures to stand
It's a concept that could attract young builders and adult builders. The original concept is built to minifigure scale but it could also be easily modified for a minimalist construction like the Architecture series.