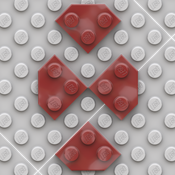 Welcome to the magical land of knights, king, princess and thiefs: Who doesn't love the middle agegs (at least I love them) ? So I build this massive LEGO customs house with the hope to reach the magical line of 10.000 supporters and then perhaps become a 10k member. So If you love the middle ages to make sure to support this project.

The moc shows a medieval customs house with a customs officer looking at what goods the arriving traveler is carrying and if they need to be cleared with special taxes. The building has three floors and consists of six individual sections that are individually removable and stackable on top of each other.

Also the moc consists of 2500 pieces.

The first floor consists of two parts: on the left, a narrow part where there is a ladder and where boxes with money are stored. The right part is both the beginning of the brown wood bay window and the place for a staircase and a fireplace. In addition, the right part is also stored goods, these are vegetables and coins of gold and silver. Between the two parts of the basement leads a road, which is paved with cobblestones. So driving over this road will be quite bumpy.

Continuing with the second floor: In reality, it would be built with clay and straw, so I have used various white and tan bricks. On the second floor is a section where the customs officer can do paperwork, write letters, read the newspaper (not invented yet) or draw. On the second floor there is also a separate part, which can be removed individually. It contains the customs officer's bed and a chest of drawers, as well as a pile of letters. Of course, the bay window also continues on the upper floors and then also leads to the 3rd floor. In this is the small workshop of the customs officer, which includes a table and a box to store tools. There is also a shelf for the customs officer's food.The part of the model that was the most difficult to design were certainly the three roofs, which are individually removable and are very detailed. The smallest roof has no special features, but the two large ones have a hayloft and a winch. The surroundings, i.e. the plate on which the house stands, are also very detailed, including many rampant plants. This also includes the line with clothespins, which the publican has stretched to dry his laundry. The clothespins are actually minifigures hands. ;)

Hopefully you like the model, if so it would please me if you support it.