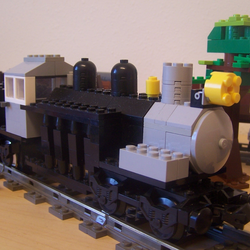 All aboard the historic Sumpter Valley Railway!  Travel back in time with this train set, based off the narrow gauge "Stump Dodger" of Eastern Oregon.

The locomotive is a 4-6-0 locomotive based off Sumpter Valley Railroad locomotive 50.  The engine was purchased by the SVRy in the early 20th Century to haul passengers from Baker City, OR to Prairie City, OR, a distance of 80 miles.  In the 1940's, the locomotive was sent to South America, where it lived out its days.

The model is equipped with a Power Functions motor in the boiler, attached by gears to the axles.  The drive rods on the side move as the train rolls.  A power functions receiver is located in the locomotive cab.  The battery box, a 4x8x4 AAA unit, is located in the tender.  The high wood load, a distinctive feature of the Sumpter Valley, conceals it.

The two cars, a baggage/Railway Post Office and a coach, are based on the SVRy's "Turtleback" coaches purchased around the same time as the 50.  Two sets of three cars were purchased, to allow trans to run from both ends.  In later years, as passenger service dwindled, some cars were modified for work trains, with others becoming baggage/RPO/coaches.  Today, four of these cars run regularly on the White Pass and Yukon Railway in Skagway, Alaska.  They have been modified and no longer resemble their original appearances.

The coach includes seats on both sides of a central aisle.  One end has a conductor's office, the other a small stove.

Do these models seem too big?  They are built to a width of ten studs, much larger than the LEGO standard of six studs.  However, this better emphasizes the narrow gauge nature of the equipment.

Also included in the set are five minifigures; an engineer, fireman, conductor, and two passengers.

For operation, the set includes a loop of track.  The images show 16 curves and 16 straights to show the train's length.  In practicality, eight straights is more likely.  The platform is about as long as the shorter of the two Turtlebacks.  Not shown is the speed controller, which would be of the variable speed type used in other LEGO train sets.

This fun set will take you back to an era where brave loggers, miners, and ranchers tamed the backwoods of Eastern Oregon, and narrow gauge wood burning steam locomotives whistled across the rails of the