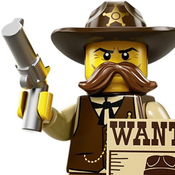 The Castle Stronghold is designed to keep intruders out that try to raid the stronghold for its precious goods, like gold. The right side of the castle has a hidden door that can swing out and reveal a stash of gold. (see image 7)
As seen in image 3, many attacks have been staged against the castle, but thanks to the golden knight and various other defenders, they have all been unsuccessful in their attempts. The forest surrounding the castle is filled with magical maple trees that change colors throughout the different seasons and the magical part of them is they can sense anger in the area and when they do, thy light on fire!. There is also a small creek that runs in front of the castle stronghold, but it has no magical powers :(
The interior of the castle features a jail cell, with its last inmate, a royal office, a sword wall for the soldiers, a dining area with a few tables, and a stash of gold. (The interior is a little plain, its not my strong suit, but I'm still working on the interior a bit so keep an eye out for updates)
The build consists of 2,670 pieces and has several variants of minifigures, including archers and knights. Overall I spent about 15 hours on this build, and would greatly appreciate your support.
Thank you so much for checking out my build!