You can see the Flickr slideshow of hi-res images and inspirations by clicking the link here. 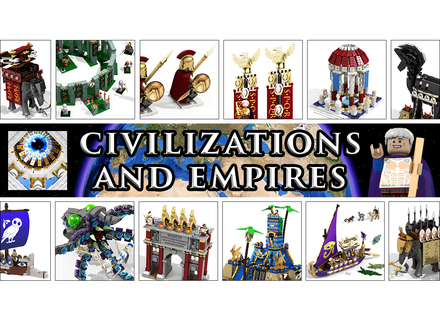 This design comes with enough extra shields to equip 16 Egyptian auxiliaries, plus 8 Nubian or African troops with their iconic and accurate Zulu-style shields. We definitely need more Africans in Legoland.

Isis is the Egyptian goddess of the Nile, agricultural fertility, love and marriage, and so she is the close equivalent of the Greco-Roman goddess named Demeter, who was one of the most important twelve gods who dwelled on Mount Olympus.

Anubis is the Egyptian god who led departed souls on their journey into the Mythological Underworld. Despite his seemingly frightening appearance as a jackal, he was seen as a trustworthy and benevolent guide for those whose souls were pure and true.

I just learned that the Celts had female Druidesses as well as male Druids.  We could certainly switch one of the Druids to a female, similar to what I did for Babylon.  If so, then we could certainly make the same switch here for the Egyptian scribes as well!

It is unknown if the part-mold to make Lego elephants is still in use, but it would be perfectly easy to swap in a brick-built equivalent for almost exactly the same price point.