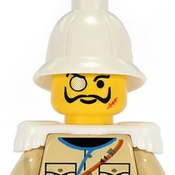 By Baron von Barron
293 comments
The Idea
Reliable as well as sustainable and affordable electricity supply is one of the biggest topics of our time, that's why I came up with the idea of building a renewable electricity producer.
Using the power of water is in this matter one of the oldest, yet one of the most eco-friendly methods to generate electricity, so I decided to build a hydroelectric power plant, also because of its often seen and in my opinion very interesting mixture of old architecture with modern technic.
The Build
The build consists of:
The Pitch
With the 10268, we have already got a nice wind turbine set in the past, but that won't feed the growing need for electricity forever alone, so I'd say it's definitely time to add another sustainable producer to the local electricity supply chain.
If you also think that a hydroelectric power plant would therefore make a great addition to the city, I'd be very delighted to receive your support, and please don't hesitate to leave a comment if you've got something on your mind about this idea in general or build in particular.
Thank you very much for your attention!
Baron von Barron
PS: If you look close enough, you may also find some little details that have already appeared in my former builds – I hope you enjoy!