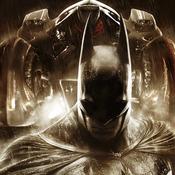 This is one of the most iconic bosses from the game...now in LEGO.
For the average person:
This set recreates the Eye of Cthulhu as a 3d Lego model.
The set is pretty much meant for display but should be stable enough for playing as well.
As of now, this set has a total of 523 bricks on it.
For those who have been following me for some time and probably saw my old model:
As you may know, i tried this before, some years ago, but this model is just...completely better.
It's built to look a lot more like a sphere than a weird rounded cube.
It's bigger, more detailed, and it looks more menacing.