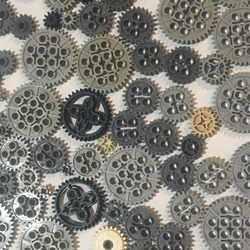 This is a working model of one of the greatest inventions in all of mankind, the clock. It is made out of multiple pieces, mainly brown bricks, to make it resemble a mantlepiece clock. It contains multiple gears, used to transport the energy of gravity pulling down on a weight, to the motion of a second hand on the face of the clock, it is small enough to hold in one hand, and surprisingly durable despite, all the moving parts. Even without the added bonus of being functional, it looks great, on walls, mantels, shelves, and anywhere else you can think to put it. The force of the weight being pulled down, is transformed into a slow steady, ticking beat, by the pendulum, which swings back and forth, and can be adjusted to either slow down or speed up the clock. The force of the wieght pulling down is slowed by an escapement mechanisn, and then is slowed down further by the use of differenrt sized gears, to match the speed of one revolution per minute.

The inspiration for this clock was when my father and i went shopping for automatic watches, watches that were capable of running without the aid of batteries, solor power, of electricity. They functioned purely off of the movement of ones wrist, doing daily activities, the concept fascinated me, and soon i began to experiment by myself in my basement, untill i created my first ever lego clock.

This idea would make a great lego set, because it is not only decrative, but functional, and is usefull in educating children and adults, as to how a clock works, and broadens anybodies understanding of overall mehanics. It is a complacated build, and was very difficult to design, but once i figured out, it would be simple to make with blueprints in place, I hope someday lego fans around the world will be able to have as much fun with this as i did.