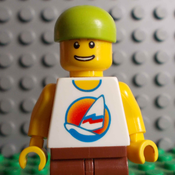 This model is a table football. Each team has six players organized like this: three centre forwards, two defenses and a goalkeeper. This idea just was brought to life in a second, just when I was building another model with LEGO bricks. Sometimes is difficult to find a good idea to bring to the LEGO world, but other times is very easy.

The table football is a classic eurpean game in which there are two players (and each one controls a team). There are three controllers per team. Each controller can be moved towards or forwards (to move the players side to side) or can be spinned (so the players can kick the ball). The objective is to score the most goals, like in a football match, to beat your opponent. If the rules aren't clearly, watch this video below:

Of cousrse, the number of players can change from one table football to another.

The football field can be a good product because it has complete playability. It's just like a real table football, but built with LEGO. The controller system is good and the design is easy but practical. The most important and interesting characteristics of this model are:

-It has a visual scoreboard (just when you look at it you see your score) where you put the bricks to show your score.

-There's an additional thing that makes the difference between common table footballs: there are blocks in the corners that you can push to move the ball to the center of the field

-The bars can spin but the players not (they are fixed to the bar). You can also move the bars forwards or towards

-You can use the LEGO ball to play (and I recommend it, because this model was designed to be played with and only with LEGO bricks, although you can use another ball with the same size)

Of course, if you don't like the teams' colors, please tell me, and I'll change them. I hope this model will success, because I've spent a lot of time building it (it is built with over 1000 pieces) and I'd like to have one of this at home.

Thanks for supporting it! :)