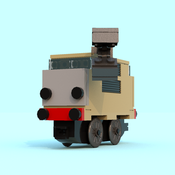 The Lego Brickhead, first released in 2017, has quickly become popular among children and AFOLs alike. This is due to their cute, chibi-like design, easy build process and low part (and thus price) count. However, almost all of the existing models are of human characters. I thought it would be interesting to try to design some Brickheadz that were not the traditional design but still captured the main features of a Brickhead (mainly the square face and eyes). The most obvious choice for me was to build Thomas the Tank Engine as I'm already a fan and he fitted the criteria I set for myself. 15 minutes later I had a Brickheadz Thomas with a rather derpy 4x4 face; I changed the face to be the standard 3x3 size used for small characters such as Hedwig and Yoda. This worked much better with the four wide Thomas I had created. Then I thought, seeing as it is 'Thomas & Friends', it'd be a good idea to build a second engine, and thus Brickheadz Percy was born. Then I kinda got carried away and built around 20 more plus a handful of rolling stock and coaches for the engines to pull. Obviously only two or three at the very most would be put into official production if I get ever so lucky, but I saw no harm in posting images of most of the characters I had created. So yeah, that's about it really. Please support my 'bright idea' if you want a chance of buying one of these in stores at some point, it'd be greatly appreciated. :3