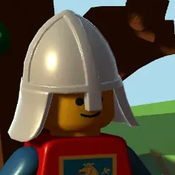 By M_Inverted_M
4 comments
This is a fairly-detailed model of the I-TEC Maverick Sport, the world's first commercially available vehicle fully licensed (in the USA, at least) for both road and air use.

At somewhere around $50, this set would put the Maverick into the hands of many more people than could afford the ~$94000 full-scale version. The price could be even lower if LEGO were to release it with a simplified parachute.

The Maverick is an example of some of the best creative engineering out there - comprehensively overcoming the toughest of challenges faced on the frontiers of civilisation (specifically transportation in the Amazon rainforest) in a practical, fun, and elegant way. It was featured as a Popular Mechanics cover story, and received one of PM's 2009 Innovation Awards. Developed to fill a need in frontier locations, it is also, in some ways, a symbol of adventure and trailblazing, redolent of the various adventure series LEGO has produced over the years, and showing that such a spirit of adventure is not just a thing for last century, but something that is still alive today.

The Maverick can go just about anywhere - racing along the roughest of dirt roads or smooth tarmac at highway speeds, or cruising above the tree-tops at a healthy 40 mph when there is no more road. There is even an option to fit pontoons, too, for water-based operation.

As such a brilliant vehicle and symbol, I think it would be a great set to produce in LEGO - a fun, challenging model to inspire future engineers, pilots, and adventurers. 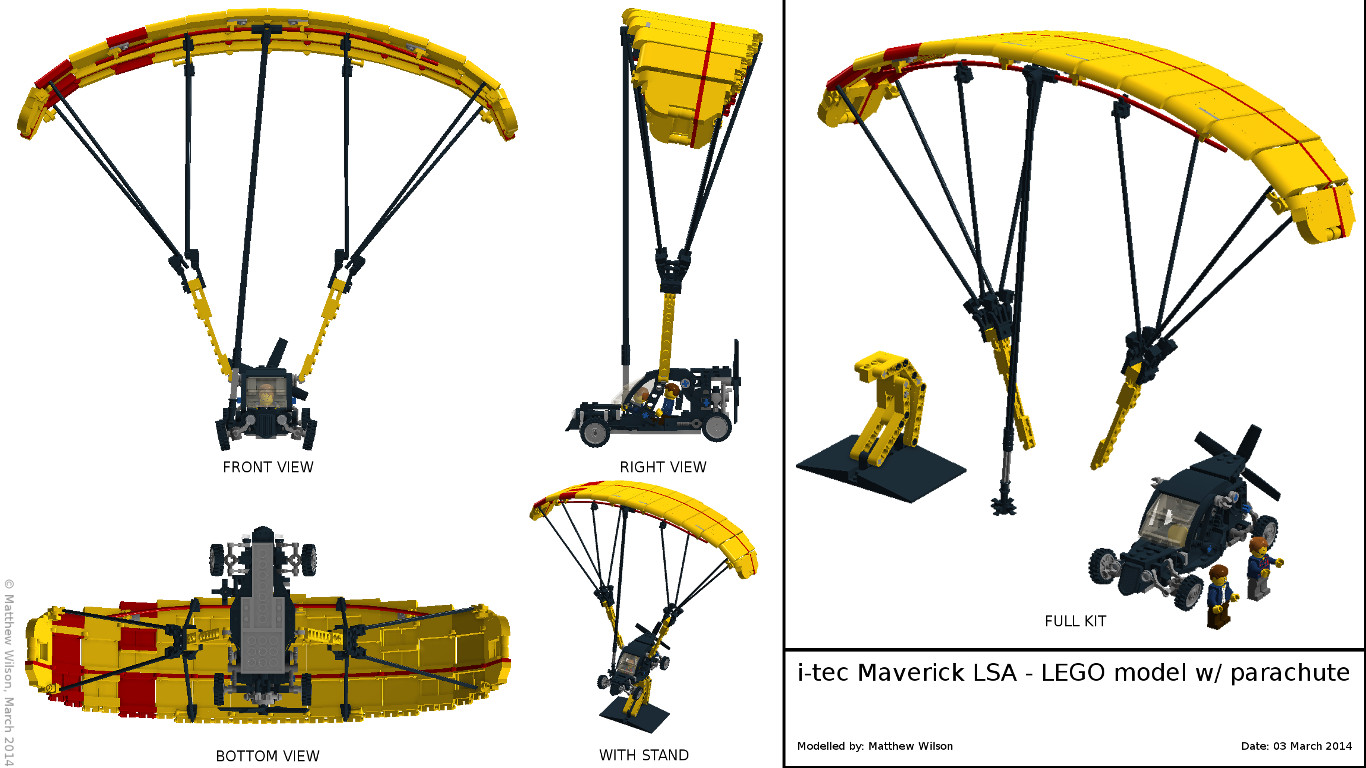 The model is made to minifigure scale, for play as well as for size- and cost-reduction purposes. The real Maverick is a spaceframe, fabric-covered, dune buggy-type construction, which would have been more accurately realised in a pure Technic palette, but the size and complexity of that construction would have made it too exclusively adult-orientated.

This way, it can be driven around the living room by small or big hands alike, the parachute easily clipped on for a flight over the dining room table, and then the whole thing put on its stand to be displayed overnight on the mantelpiece or on top of the computer.

Unlike in the real thing - where the parachute is a minute fraction of the mass of the vehicle, and is actually lifting the vehicle most of the time it is deployed - the LEGO parachute will weight at least as much as the car itself, meaning I had to choose fairly rigid structures for the mast and 'lines'. The 'lines' are still flexible, however, so the parachute should remain relatively supple and a good approximation of a ram-air-inflated fabric structure. 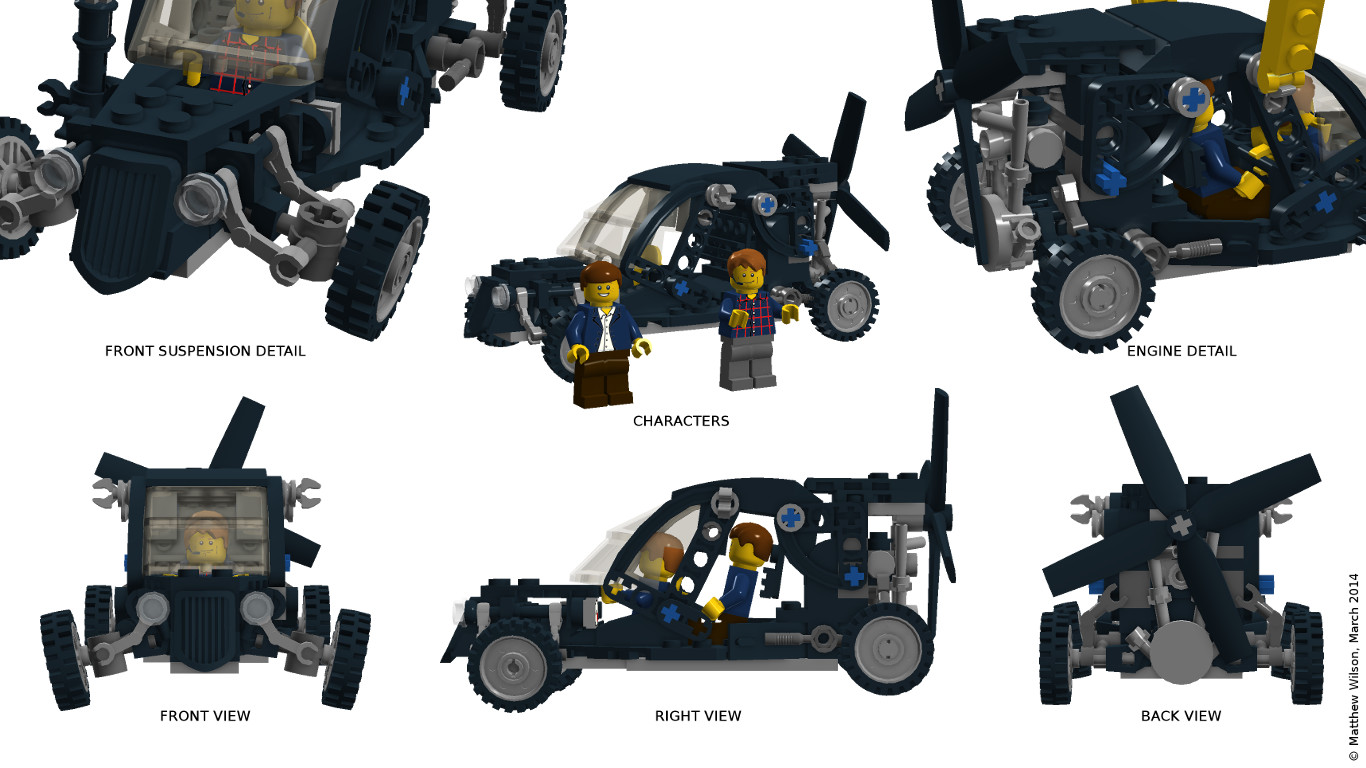 The front suspension is adjustable (by sliding the d/grey axle in and out of the black arm attached to the chassis), so it can be level for driving, and lowered (as in the pictures) to emulate no-load conditions in flight. Having only built a virtual model, for lack of pieces, I cannot guarantee the suspension will not slowly sag under the weight of the combined car and parachute if left on the ground in that configuration, but putting it on the stand for the night should solve that problem. 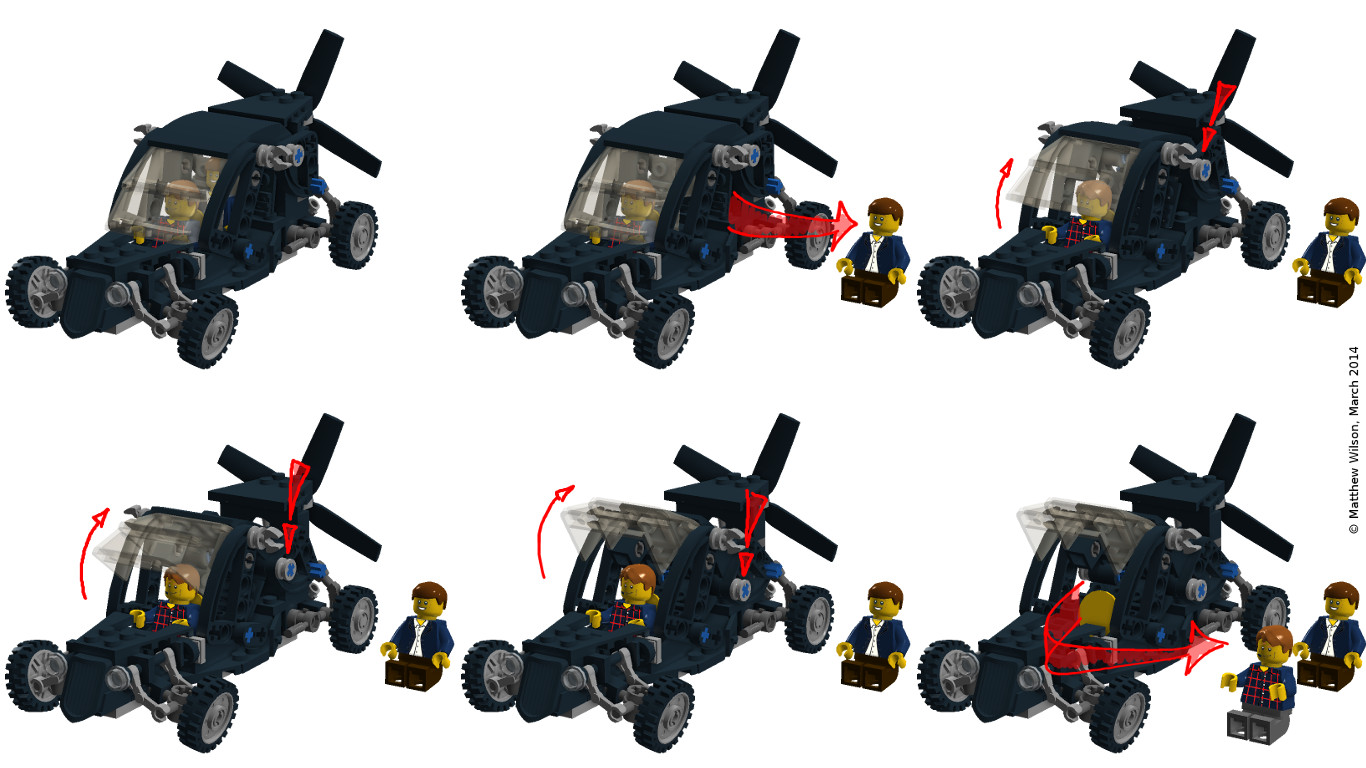 The passenger or luggage can be placed in the back from either side, even while the parachute is deployed, but I have used a 4-arm-linkage system for access to the driver because it gave the best approximation of the shape of the canopy - this might be changed if LEGO were to produce this model.

As it is, to access the driver, the passenger (and parachute) are removed, and then the middle of the roof is pressed down. The windscreen pops up, and the driver can be pulled out the front. The roof can still take the weight of the parachute because, when the canopy is closed, the weight from the 'lines' is transmitted down to the little Technic 2M half-width beams which, in turn, rest on the floor of the vehicle when the structure is closed.

For an animation of the process, see: http://minvertedm.deviantart.com/art/Maverick-Openning-439021972 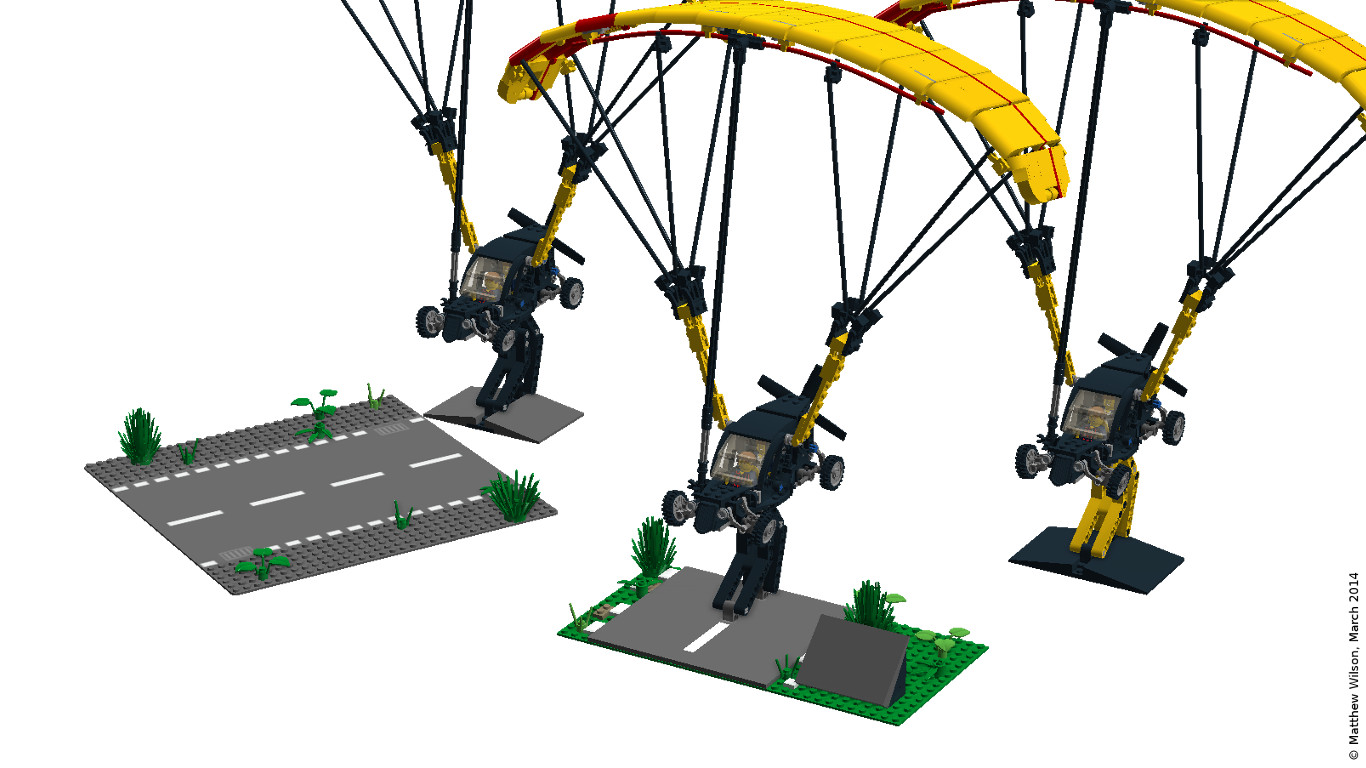 As for the stand, I developed three options – (right to left) a basic stand in I-TEC colours, a "scenery stand" with plinth for information on the real Maverick (although the basic stand could have that information on a sticker on one of the base wedges), and a road+stand for more play options. Obviously the basic stand would be the most cost-effective, and both of the others would add noticeably to the cost, but I do like the idea of putting the model in a context when displaying it.

Smithsonian Channel introductory video on the Maverick and its creators:
–

The Maverick itself is the intellectual property of I-TEC. I have permission from them to post this concept. I am not a part of I-TEC myself.