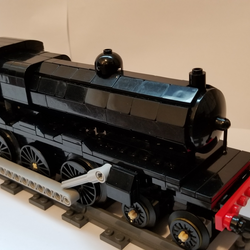 The GCR Class 8f is a steam locomotive with a wheel base of 2-4-0.Ten were made for the Great Central Railway,but all were ultimately scrapped.I chose this engine for my Lego ideas project because I wanted to build an engine with this exact wheel base.The potential set will include: