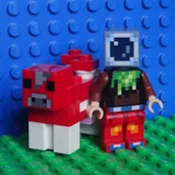 This is the Nintendo Switch. It is a home video game console developed by Nintendo. It is a "hybrid" console. You can play on a tablet or put it onto a docking station to play on a television.

On this Lego version you can slide the Joy-Cons on and of the console and the Joy-Con grip. The console has a game card slot as well to put the game card in it. There is also a Nintendo Switch dock and you can open it at the back to see the AC adapter, USB and HDMI ports.

I build it because I thought that it would be a good idea and it was a challenge to reconstruct the Nintendo Switch as accurately as possible.

In my opinion it would make a great Lego set because it is a new console and I believe that a lot of people would like to build it with Lego.

Here is a video to show the Lego Nintendo Switch: