By whatsuptoday
31 comments
Avatar is a 2009 American epic science fiction action film written and directed by James Cameron. Here is an adaptation in Lego bricks of the famous massive robotic suit: the AMP.
This model is composed of 539 bricks and 65 bricks more for weapons with a heavy automatic gun and a mega bayonets! It has the number 11, that's the ship of villain Miles Quaritch ("Beyond Glory").
The Mitsubishi MK-6 Amplified Mobility Platform (or "AMP" suit) is a distant descendant of the first military exoskeletons used on Earth in the mid-21st century. It was improved during military service in a myriad of combat theaters – from arctic to jungle to desert – over the decades. Sealed and pressurized models for toxic environments were developed as well. The suit is used extensively on the Moon and Mars colonies (where they are powered by fuel cells and/or monopropellant ceramic turbines). Its well-tested capabilities have proved invaluable in the deadly environment of Pandora. The Na'vi name for it roughly translates as "shield that walks" or "not-demon walking". 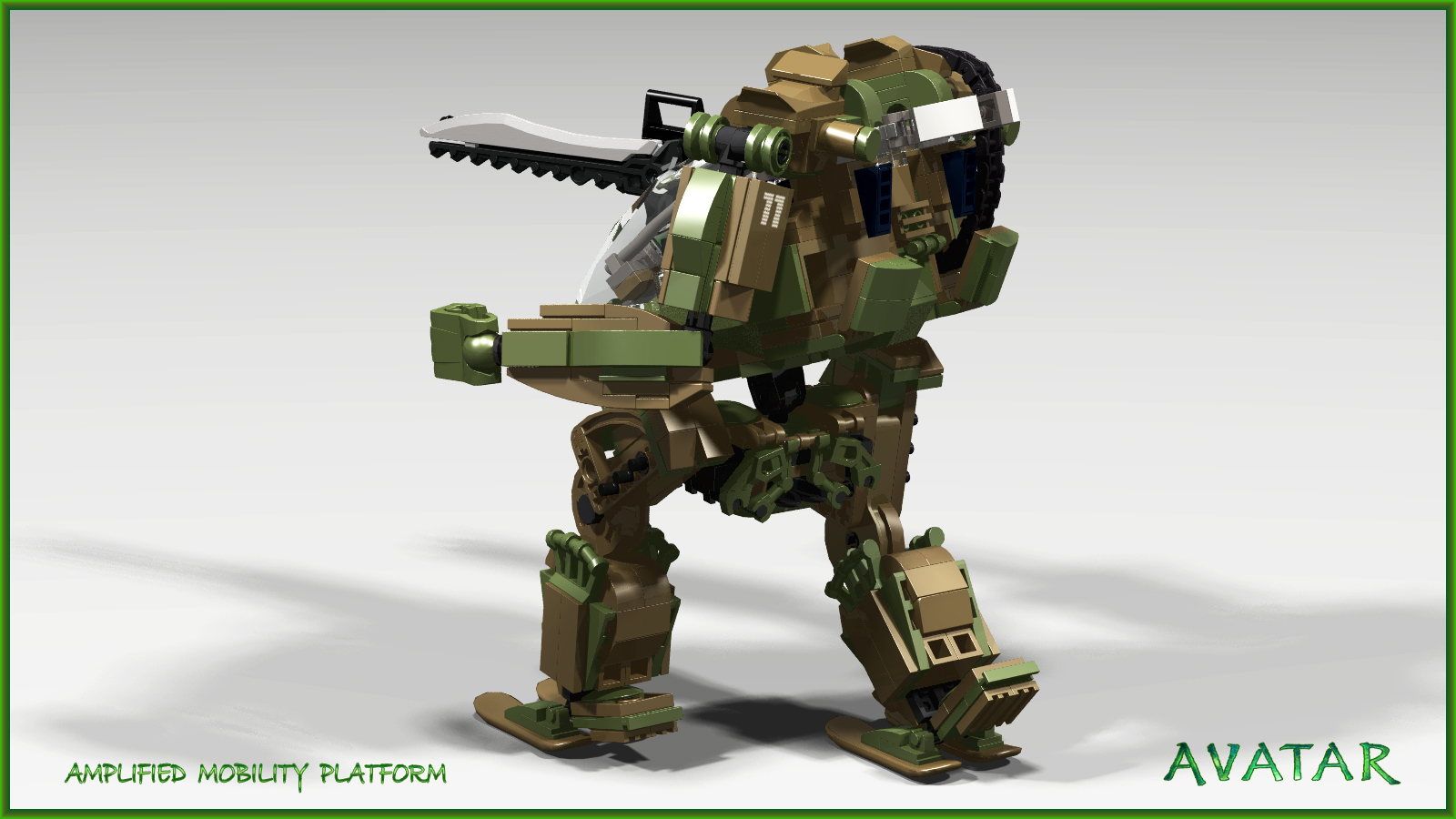 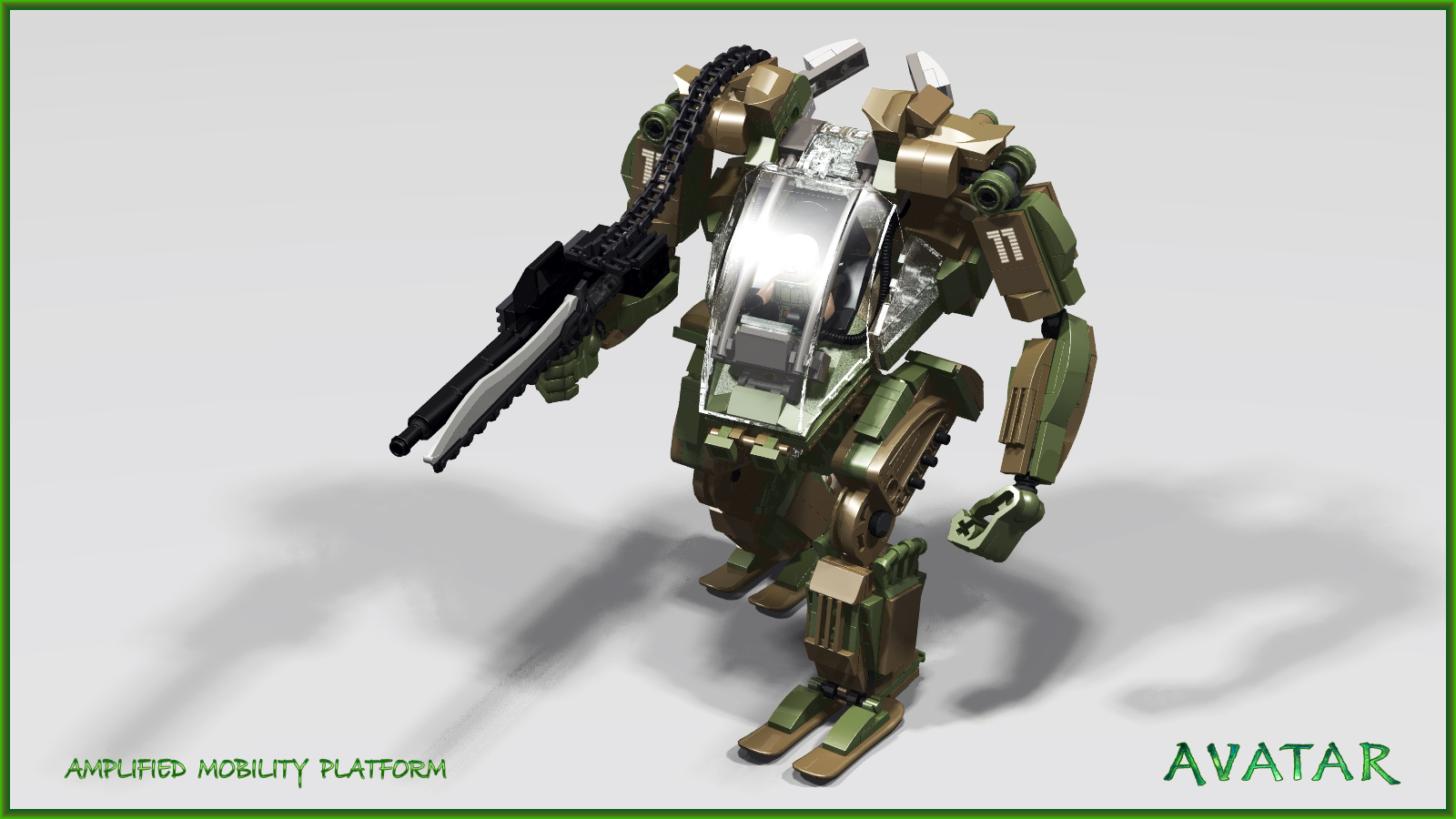 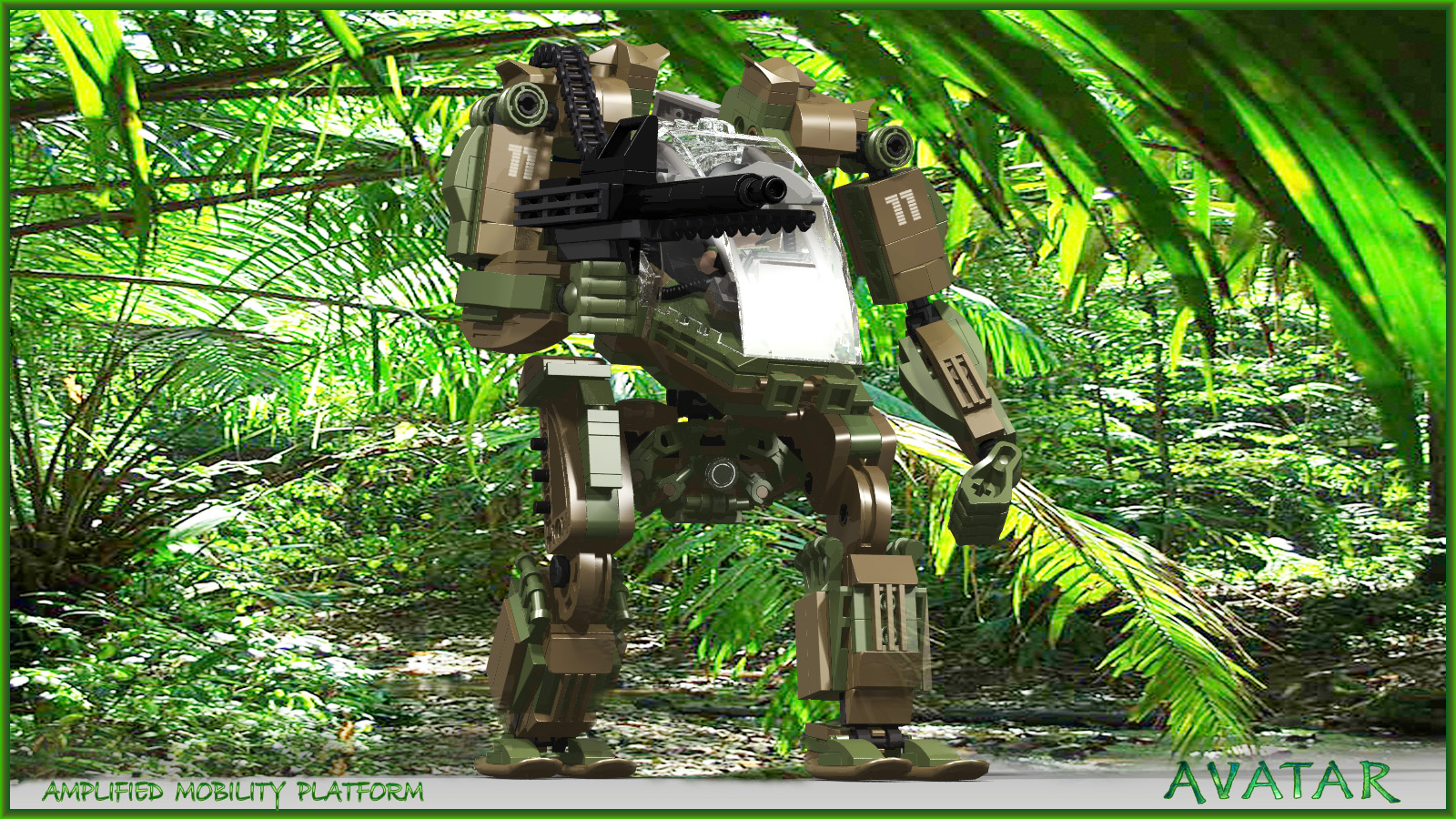 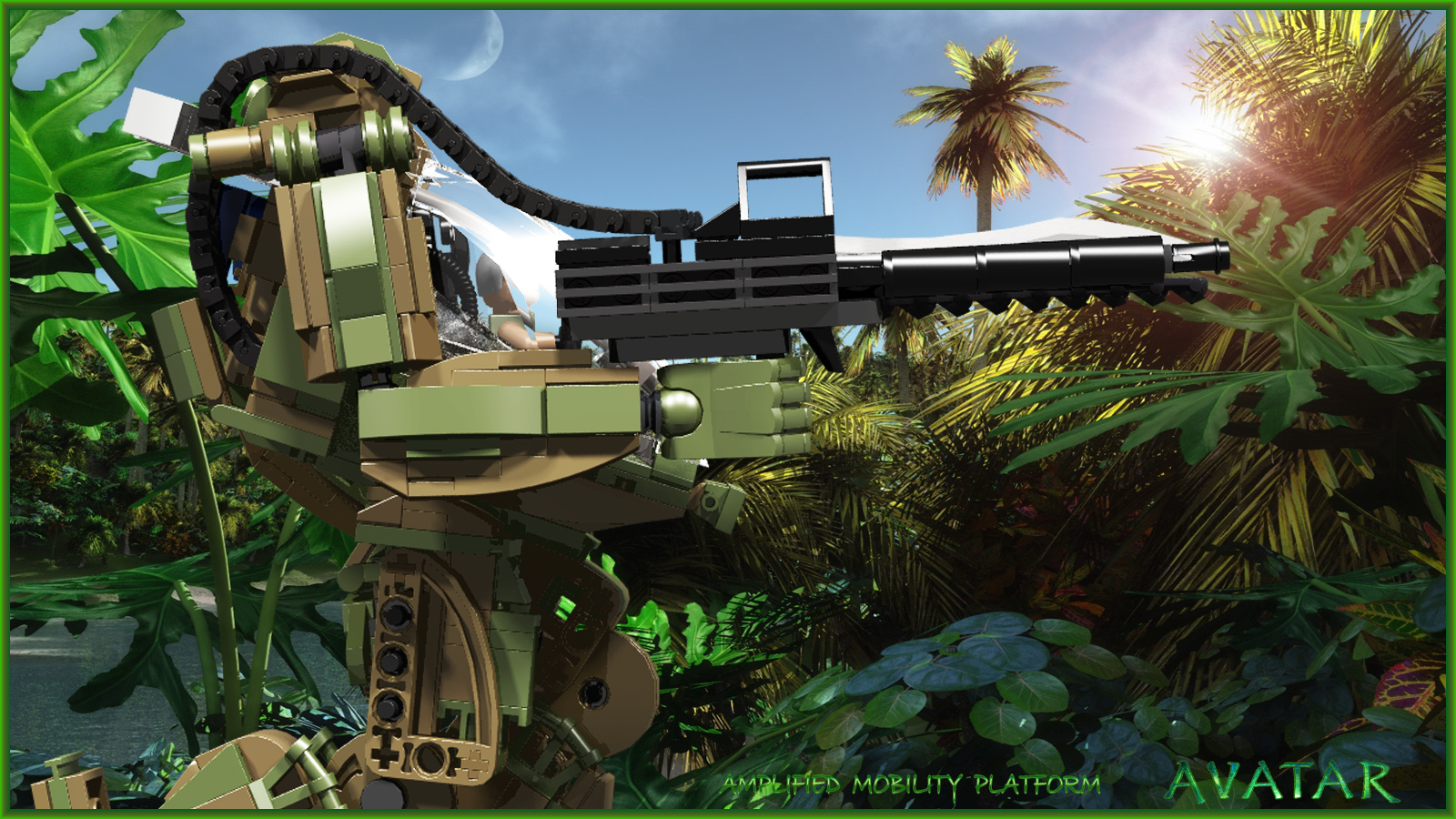 The human-operated multi-purpose machine amplifies the strength and mobility of a soldier or civilian worker while providing protection from military and environmental threats. Unlike earlier designs in which weapons were integrated into limbs, the AMP suit is a multi-purpose machine, able to duplicate all functions of the infantry soldier. Since soldiers spend much of their time loading and unloading equipment, and performing other tasks besides operating weapons, it was determined that the AMP suit needed the same functionality as a human: two legs, two arms, and highly dexterous hands. This allows not only a wide range of functions, but allows the suit to operate a variety of weapons systems.

Arms operate in a directly scaled relationship to the operator’s arms, which allows better spatial positioning of the hands. The fingers and thumb are in direct 1:1 ratio. The servo armature has force feedback, and resists the movement of the operator’s arms when the suit's limbs meet an obstacle. The operator can "feel" what the suit is doing. It is said that the suit can be operated in full darkness, by a skilled driver, by "feel" alone. The legs are actuated by foot-pedals which amplify on an even larger ratio. In fact the leg sensors work slightly differently than the arms. Due to the confining spatial envelope around the feet and legs of the operator, the pedals cannot move in long strides, even on a scaled relationship. Instead, they sense the force and direction of the input and the on board computer triggers a corresponding programmed movement of the legs. So the operator creates pressure and direction "cues" which trigger leg movements. The suit executes the "intention" of the pilot, calculating terrain factors and momentum to perform balanced movement. While an average pilot can learn to manipulate the AMP suit in combat conditions, it takes months longer to master the transition from supine to an upright position. However, through the use of gyroscopes and stability chips, AMP suits rarely topple. Auto stability programming maintains center of balance. If the operator happens to be injured or killed, the AMP suit has an automated "walk back" feature. This was developed to protect the AMP suit, as it is a significant investment to the RDA.

Using the suit, a driver is able to punch through a tree trunk, lift a half ton cargo crate, or rapidly build prefab units without a construction crew. In combat, the suit can provide heavy fire support to infantry units.