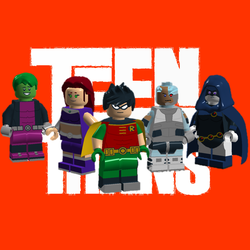 Lexcorp, towering above Metropolis, is the corporation founded and run by Lex Luthor - the most powerful man in Metropolis, billionaire, genius, and Superman's Arch Nemesis.

The design of the Lexcorp building, commonly known as Lex Tower, has changed between different mediums.  I present it here as a "L" shaped skyscraper (six story skyscraper, anyway).  I chose a grey color scheme to give it an industrial look.  The first eight pictures give a 360 view of the building.  the ninth gives a view from the top.  Inside the building are a lobby, employee offices, a mechanics workshop, genetic research laboratory, chemistry laboratory, "war room", and Lex Luthor's office.

The lobby is located on the ground floor on the right side of the building.  It serves as a waiting room for visitors and clients to comfortably wait for their appointments.  It also serves as a reception area.  In it are a receptionist's desk, a couch facing a (blank) television, table with coffee supplies and maker, and a soda vending machine.  I decided not to include any employees or civilians in this project (1. there were many far more interesting characters to include 2. I didn't want to include too many figures) so in the eleventh image I have Metallo playing receptionist while the heroes await their appointments with Lex.  The lobby is the focus of images ten and eleven.

The two offices for Lex's employees are located on the ground floor on the left hand side.  Each room has two chairs and a desk with a computer on top.  The offices can serve any purpose from tech support to mad scientist office.  In the thirteenth image, I have the villains assisting the heroes. Images twelve and thirteen focus on these offices.

The mechanical workshop, located on the second story, is where Lex Luthor builds the weapons he uses to take down the Man of Steel.  I designed this room to look like a garage workshop and the mechanics laboratory from the Superman: The Animated Series episode "Ghost in a Machine".  On the left hand side, is a computer for storing and displaying blueprints.  The center of the room includes a rotating worktable, chair, and overhead microscopic analyzer.  The right hand side has two tool chest holding all the equipment Lex could need.  Images fourteen and fifteen focus on this room.

The Genetic Research lab is located on the third floor.  I based this room solely on the Lab from Superman: The Animated Series episode "Identity Crisis".  I never really figured out what any of the stuff in the room was or is for, but it looked cool enough.  Images for this room are sixteen and seventeen.

The war room, fifth floor, is where Lex stores the weapons he uses to take down the Man of Steel. On the left is a dock where Lex's robotic power suit is stored.  On the right is a weapons rack with several blaster for taking on Superman.  Images for this room are twenty and twenty one.

On the top floor, so that Lex can look down on everyone, is Lex Luthor's office.  This room was solely inspired by the DCAU.  On the left hand side is a couch, and in the center of the room is Lex Luthor's desk (straight from the DCAU).  Images twenty two and twenty three focus on this room.

Here is a quick list of the figures I included in this proposal (images are on the way).

Thank you so much for taking the time to check out my project, support is much appreciated as is telling your friends and family about this project, feedback addressing any flaws or just giving pointers is always welcome, and have a great day.