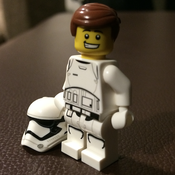 This would be a great display set to add to the Lego Ideas roster, including brand new minifigures of all three acclaimed scientists. In the set pictures above, the minifigures aren't what I want them to look like. Unfortunately I do not have access to the parts I would need to make convincing minifigures.

Albert Einstein: A theoretical physician with a Nobel Prize in physics and was the first person to create the now iconic equation of E=mc2

​Isaac Newton: An astronomer, mathematician, and physicist that supposedly theorised gravity when an apple fell from a tree and fell on his head

​Marie Curie: The first woman to win a Nobel Prize and the first person to win two.

​The two gold flat tiles on Marie Curie's desk represent the two Nobel Prizes that she won, and Albert Einstein's Blackboard should have his equation on it. New prints would be needed for both, something I can't exactly achieve.