By Xendor
1 comment
After the Final Battle, Toa Tahu, Ackar, and Turaga Vakama offered Stronius the chance to learn what it means to be friends. Sacrificing their old ways, Stronius decided to join the New Alliance in hopes of not only finding a better way of life, but also gaining strength with the Glatorian and Toa.

But there were still a bunch of Skrall that refused to join the Glatorian. Instead, they rebelled, and chose a Skrall to become their leader. Branar was selected, and was given Tuma's sword. Somehow, the sword mutated Branar into the new Skrall leader. They left, and disappeared. 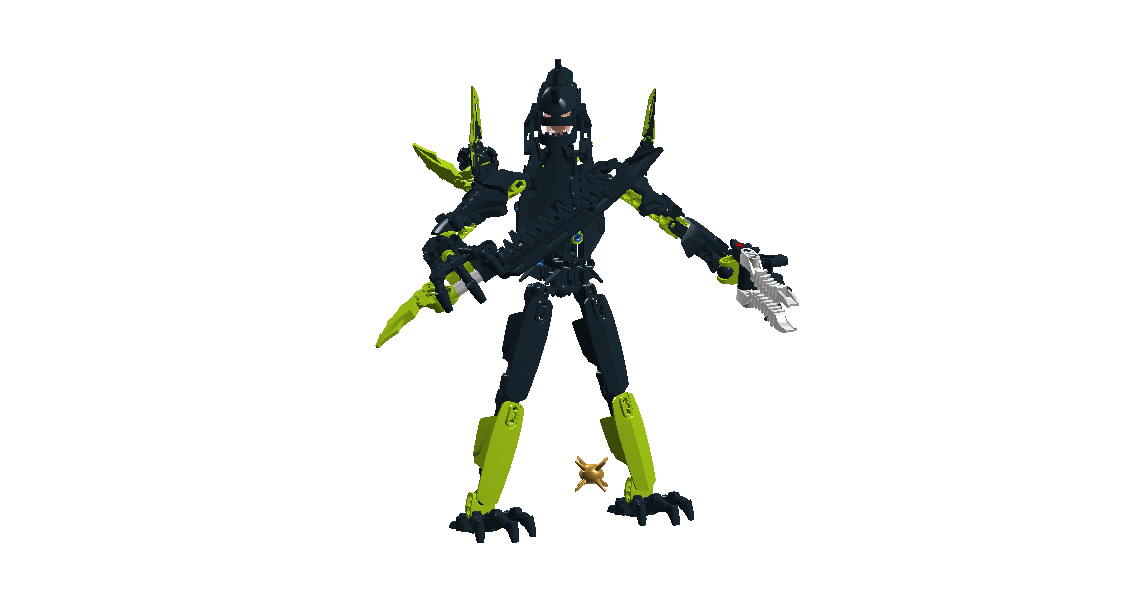 Now standing above all other Skrall, some in the rebellion claim that Branar is almost as powerful as Tuma was. But now that Spherus Magna has been repaired, the sword has developed the ability to create sound waves. Branar uses these sound waves to either locate opponents, or to create an ear piercing screech. His Thornax launcher is twice as powerful as any the Skrall have developed, and the Skrall make sure that Branar has the ripest, most explosive Thornax, making him a definite threat. 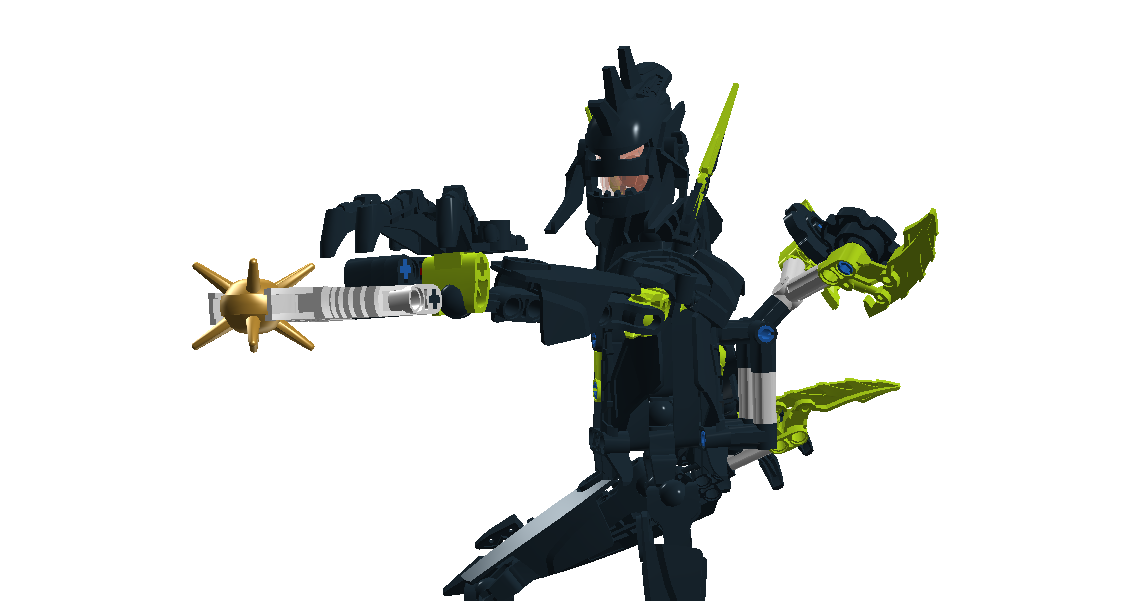 What's more, his Thornax is made out of the armor spikes that were on the back of Tuma. When Branar is finished, his spikes will be used to make a launcher for the next leader. This is a tradition Branar started to honor Tuma. 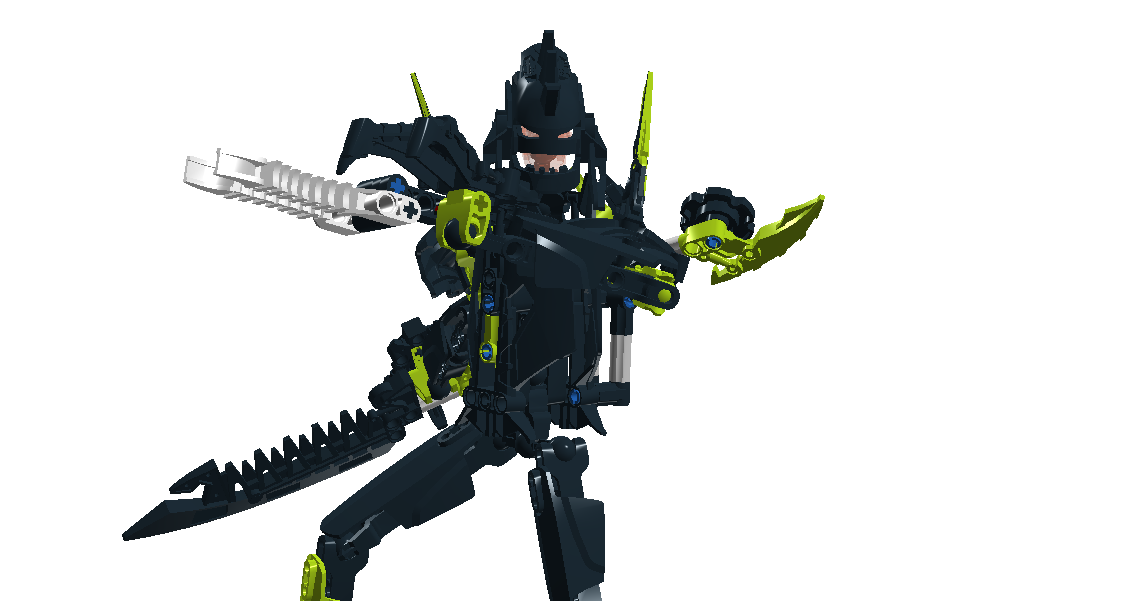 Now, Teridax is trying to get in contact with him. Will Branar join the Makuta in his quest for revenge?

Missed last chapter? Then go to the Dark Hunter Experiment 207.

Tyrant and his team of Vahki have been out for many weeks, searching for the Shadow Skrall, a team of rebellious Skrall that left when Stronius decided to join the Toa and Glatorian in peaceful co-existence. Now, they have reached the last place where they were spotted.

Tyrant: Rorzakh, can you sense the direction the Skrall are in?

One of the Rorzakh, a Vahki of earth, planted his staffs into the ground, and sent a psychic pulse into the earth. After a few seconds, he turned towards the setting sun.

Tyrant turned around to see that one of the Nuurahk was possessed. He then kneeled before it.

Tyrant: Teridax, it is an honor for you to communicate with us from such great distance.

Teridax: What is miles for you is only inches in the spiritual form of physics. How is your progress?

Tyrant: This is the last known location of the Skrall. However, the prints seem to be a bit faint. Even with their advanced eye sight, it will take a bit of time, a few hours, till we find their tracks.

Teridax: If I’m correct, then the Shadow Skrall should be nearby.

Tyrant: What makes you say that?

Tyrant began scanning the terrain with his eyes, not moving his head. Suddenly, he noticed a moving piece of grass to the right.

Three Nuurahk disappeared, going into hiding beneath the tall grass.

Teridax: I must go now. She’s calling me.

Tyrant: Do you trust her?

Teridax: I have yet to know. Like her name, it is unknown what she can and will do.

Just as suddenly, the three Nuurakh that went for the Skrall came back, with a full, struggling bag in tow.

They opened the bag, and dumped out a Skrall wearing grass, leaves and reads on his body.

Tyrant: How many are you?

Skrall: (Chuckle) You’ve been walking on us all this time.

Tyrant stared at him for a second, then picked him up by the neck.

Tyrant: What do you mean?!?

Suddenly, the land all over jumped up, exposing an army of Skrall.

Teridax: You called me.

Unknown: We found something that I think you’ll be interested in.

They went down a tunnel to an entry way, guarded by a team of Rorzakh.

Unknown: The Zadakh broke through this door. We were thinking that it might’ve contained some of your most powerful Rahkshi. But we found something else.

Inside, they found that the cavern was really an exit out of the giant into a cave. In the cave, there was a dead Glatorian, laying in front of an altar that held a mysterious mask.

Teridax: And this interests me, why?

They walked over to the side of the cavern, where the cave met the mech. The Unknown pointed at two bars of metal sticking out at the fault.

Unknown: This is the same kind of metal used on the armor of this mech.

Teridax: So? It could be from the mech.

Unknown: But it’s not. This metal is buried into the cave.

Unknown: We also found these markings. The same kind of markings that your kind use.

They went to the back of the cave. There, Teridax’s shadow moved across the wall.

Teridax: This writing… it’s from a Great Being.

Unknown: A Great Being. Shall we destroy it?

Teridax: Though the Great Beings are indeed our enemies, they know more things than us. So if we read this…

Teridax paused. His shadow hovered over a spot for a few seconds, and then continued over the writing.

Unknown: What is it?

Teridax: This writing was written by a Great Being long gone. Apparently, this was a prison that held an… insane Being.

Teridax: Insane. During his time here, he was secretly creating a mask. A mask that would be the equal of the Ignika. A mask of Death.

A paused over another spot.

Unknown: Fitting. Do you think this corpse was him?

Teridax: No. At the end of this, he says that he was going to be taken with the Great Beings off of Spherus Magna. Whoever this is, it wasn’t him.

The Unknown was looking at the corpse. She then walked over, and began inspecting it.

Unknown: This corpse is all here.

Teridax: What are you thinking?

Unknown: Couldn’t you just take it? You know, make it your own?

Teridax: I can try. But you need to revive it.

One of the Rorzakh hopped in. Suddenly, the Unknown grabbed it, and tore off its head. The guards outside the cavern gazed in, and quickly went back to their posts.

Teridax: I don’t think any of the others want to be next.

Unknown: Oh well. I only needed one anyway.

Teridax’s shadow covered the corpse, and the Unknown started attempting to revive the body by shocking it with the sparks from the Vahki’s neck.

Skrall: Now, originally I was going to walk through everybody and ask you to surrender, but I guess this is as good a way as any.

Tyrant: If you’re looking for weak losers, you’ve come to the wrong people.

Immediately, the Skrall moved in. However, the Vahki were ready. Kanoka disks flew out, freezing, shrinking, weakening, and teleporting many of the Skrall all over. Every Vahki used their staff abilities against the Skrall. And Tyson was tossing ten Skrall at a time. No one could touch him.

After ten minutes, over half the Skrall were either wounded or dead. However, the leader was still standing.

Tyrant: Had enough yet.

The leader stared at him for a few seconds. He then raised his fist, and all the Skrall gathered behind him.

Skrall: What do you want with us?

Tyrant: I must speak with your leader. We have a… proposition.

Skrall: Well, we do need a powerful force in order to get our revenge. Very well. But tread lightly. Even your Vahki wouldn’t stand against him.

But the Skrall were already on the move. Tyrant and the Vahki followed after them.

The Unknown was about to slam the Vahki down on the corpse again, when it suddenly grabbed her wrist. For a second, the Glatorian stared at her with kind, scared eyes. But immediately afterwards, the eyes grew cold, and he squeezed harder.

Unknown: Who are you?

Glatorian: Who do you think? Do you see my shadow anymore?

Unknown: Alright. Only Teridax would know that.

Teridax: What, did you think it was the Glatorian?

Unknown: Better safe than sorry. I did get to see his eyes, though.

Unknown: No, not like that. I saw his character.

Teridax: Reading a person’s character is an important trait during battle. Keep improving it.

They then walked over to the mask. As they were doing so, the Unknown looked down at Teridax.

Teridax: Not for long.

Teridax picked up the mask. It began pulsing as Teridax began lifting it to his head. Suddenly, it fused to his head, and he began his evolution into the Master of Death.

The Mask of Life has been sitting in the Temple of the Golden Armor, waiting for the time it would be needed again.

Suddenly, it felt a sudden wave of… cold? Fire? Force? No, something else. Something just as powerful.

But what? None of his creators had made anything this powerful. Its power matched his own.

It’s time. Toa Ignika must return. And now, more powerful than before.